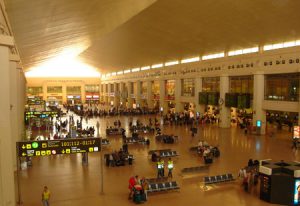 The inauguration of the new terminal at Malaga airport last year has not meant the end of the work of improved facilities for travelers. Spanish Airports and Air Navigation (Aena) has taken steps for the reform of the Pablo Ruiz Picasso terminal, with the idea to adapt its image to the new T3 and modernize its service.

The T2, named Terminal Pablo Ruiz Picasso, receives an investment of 10.3 million Euros in the first phase. This investment will enable the reform of the existing building modernizing and changing its image, in greater consistency with the T3 and deepening the concept of a single terminal, simplifying much more passenger flows.

Thus there will be several various stages of improvements within the old passenger facility, intending to improve its appearance. This work will be implemented while maintaining operating these facilities. In fact, this is the main difficulty of the project.
The “Malaga plan” faces its last performances, after the opening of T3 and the new commuter train station, and the upcoming end of the construction of the second runway. The end result is that Malaga airport will double its capacity.