The storm affecting the entire Peninsula has come down in Malaga in form of torrential rain with flooding in basements, streets and garages in Malaga city and neighboring villages, with 35 liters per square meter and which required intervention of police and fire brigade, although without any particularly serious incidents.

As well has been affected the national road N-340 as the heavy rains produced a landslide of rocks and earth.

The state meteorological agency stipulates that the province will be in yellow alert until midday this Thursday, with snowfall from 600 to 800 meters.

Since yesterday night there have been continuous strong rainfalls in several points of the province. Thus have been registered 62, 4 liters per square meters in Estepona and 53 liters in Fuengirola.

The forecast for this weekend awaits a strong decrease of temperatures and icy northern winds, with minimum temperatures of 2ºC in the capital and until -3ºC in the interior (Ronda). The snowline sinks to 500 meters, with possibility of precipitation even in areas where this phenomenon is little frequent. The highest temperatures are around 12ºC along the littoral and around 7ºC in the interior around Ronda and Antequera.

From Saturday onwards are expected once more remarkable rainfalls, which, in principle, remain on Sunday, Monday and Tuesday.

From today until Friday the 8th of January will be active the orange alert due to snowfall in the provinces of Jaén, Granada and Almería with precipitations up to 20 centimeters. 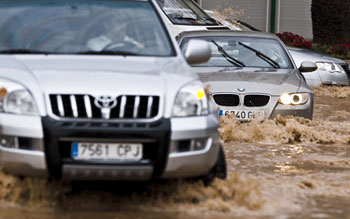