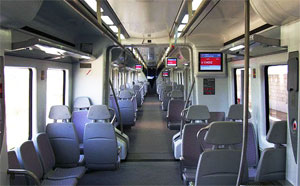 The new suburban train station at Malaga Airport is operating since the 10th of September. The improvement work of the airport is thus progressing at good speed, as the opening of this new station opposite the new terminal T3 was scheduled for the end of 2010, along with the second access road.

The suburban train links Malaga Airport with Malaga city and several of the mayor resorts along the Costa del Sol, such as Torremolinos, Benalmádena and Fuengirola, being the respective terminals Malaga Alameda (city centre) and Fuengirola.

The suburban train station is situated in the underground; however it is held in the same design as the new terminal, very spacious and with plenty of natural light and with glass and chrome as the main elements. The station is partially built with glass walls and roofs and thus it is constantly supplied with natural daylight as well as fresh air.

The suburban train station of Malaga airport is linked entirely to the new T3 and is part of the transportation hub situated in front of the Plaza of the airport, just outside the arrivals hall. Thus travelers to and from the T3 will enjoy from now on maximum arrival and departure comfort, meanwhile users of the car park P2 and the terminal T2 will have to walk five minutes with the help of conveyor belts.