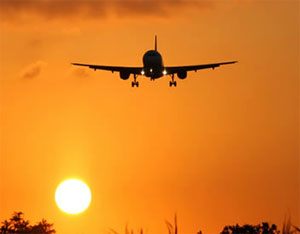 Madrid Barajas already has this system that allows airlines to save fuel and reduce CO2 emissions and noise.

Malaga Airport will launch from November onwards the so-called ‘green landings’, a system that has already been launched in Madrid terminal.

Madrid Barajas was the first in the national network to enable airlines approach maneuvers that represent savings of 25% in fuel consumption, lower CO2 emissions and a major drop in the noise in the nearby area of the Airport.

Airlines operating at Terminal Madrid can do this kind of maneuver, at night, since last August. Iberia is already using it, especially on transatlantic flights arriving at Barajas in the early morning hours.

Over the next few months will take place the implementation of these maneuvers in the airports of Alicante and Valencia. The process will continue from November onwards at the terminals of Barcelona, Santiago de Compostela and Málaga. In Palma de Mallorca and Gran Canaria will be used this procedure starting from December.

Spanish Airports are among the most active of the European Union in the implementation of the “green landings” which, according to figures from International Airports Council, are already used in 33 airports in Europe.