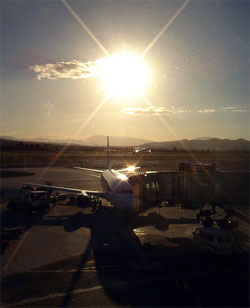 Malaga Airport will continue to grow. The Terminal 3, known as T3, which opened last March, will be joined in early 2012 by the second runway which will represent a qualitative leap for the facilities in Malaga.

The second runway will be completed in 2011, in fact, the construction advances at a good pace and is at about 80 percent of execution; however, it has to undergo a process of calibration and quality certifications which delay its launch until early 2012, due to the existing legislation in this area.

The opening of the T3 has been a leap in quality and image and has doubled the capacity of Malaga airport. In fact, since the inauguration of the airport terminal until last November, have passed through these installations more than 9.5 million passengers on 80,000 flights, according to Aena.

The main tourist gateway to Malaga will remain the closest ally of this industry in the Costa del Sol. One of the most important improvements has been the new intermodality, incorporating a transport interchange at the new terminal.

Thus, the user can choose between the commuter trains, with a new station; taxi ranks, buses and car hire companies in order to make his passing through the terminal as smooth as possible.

To all this adds a different commercial offer, with a wide range of establishments that have chosen Malaga airport to implant or to continue their growth.