The 5th Skate Day unites about 2,000 people in a fun ride through the streets of the historic centre of Malaga

Yesterday was held the fifth edition of the Day of Skate in a circuit around the old town of Malaga. The event, which is not competitive, developed through the main streets of the Historic Centre. Starting at the Town hall, the ride continued for Guillen Sotelo, Cortina del Muelle, Plaza de la Aduana and Cister and entered the old town, returning to the finish line, located in Avenida de Cervantes, opposite the Park Mansion.

This fifth edition of the Skate Day has broken a record of participation with two thousand registered participants. In addition, some skaters joined the event even without being registered.
Young and old took on yesterday morning the main streets of Malaga. Many of them did with original costumes and joy was not lacking in a ride that lasted an hour.

Once finished the circuit through the Historical Center, were given out awards in each of the six categories: most original equipping of children, men, women, the best combined couple and the best combined family. There were also raffles and giveaways and a recreational area where participants could practice as other forms of skating, such as extreme, hockey, speed, slalom, etc. 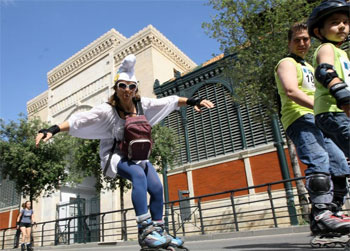