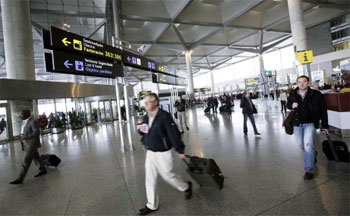 The new terminal at Malaga Airport, the T3, celebrates on Wednesday March 16 one year of operation, during which more than 12.15 million passengers have passed through the facility, according to data from Spanish Airports and Air Navigation (Aena).

This new terminal has contributed to increased traffic between March 2010 and February this year, since it has made possible the launch of new routes.

Although this new building is intended for flights to the EU Schengen area, which requires no passport control, all passengers in the airport pass through the security checks in the new terminal, hence it has been used by virtually all travelers.

The T3, which was inaugurated on March 15, 2010, has an approximate area of 250,000 square meters.  The T3 will be joined in early 2012 by a second runway. Also is currently under construction the southern access to the airport, which will connect it directly via an overpass to the motorway A-7.

The terminal 3 is also connected directly to the commuter train, after last September, six months after its inauguration, became operational the suburban train station that is situated next into the passenger terminal.

The launch of the new terminal has led to another improvement which is that passengers have at their disposal a much broader dining and shopping offer than in the old passenger building.