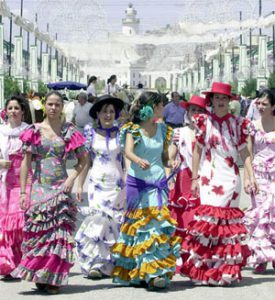 The Feria de Malaga has a long standing tradition and is one of the mayor events on the Costa del Sol in summer.
It is a fair that you should not miss as it is actually one of the most important fairs which are held in Andalusia, with a very significant influx of tourists from the rest of Spain and also tourists from abroad.

The fair in Malaga is traditionally celebrated in August and this year will be held from the 13th to 22nd of August. The Feria de Malaga is outstanding for its good atmosphere, music and dance, wine and tapas and a lot of fun. During the event are held on three different stages concerts and performances, which are generally for free.

Another feature of the Malaga Fair are its two different aspects: the Day Fair and The Night Fair.
The day fair is held from midday onwards in the streets of the historic centre of Malaga, around the Calle Larios, with a lot of possibilities to sample wines and tapas and enjoy the festive mood and street life.
Once the sun goes down, the party moves on to the fairgrounds of “El Real”, with many booths, music, concerts and the typical fairground attractions, where visitors can have fun until dawn.

On Friday, August 13th, before midnight will be held the official opening speech for the Fair on the beach of La Malagueta, where thousands of locals and visitors are congregating. Immediately afterwards there will be a great firework, followed by an open air concert around 00:30 am at the same beach.

In order to facilitate the Access for visitors to the fair this year the town hall of Malaga enables 10,000 parking spaces in the fairground. There are also 18 additional bus routes for 1.50 €.