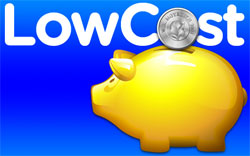 How is it possible that low cost flights are so cheap? Many of us might already have bought at some point a plane ticket at low cost price. This means many times traveling to the same destination paying a 40% or less than with a conventional airline. To understand this, we leave the 8 basic keys of success of low cost airlines:

2 – The return is about 50%, faster when using small airports, taking 25 minutes to take off again to return to the origin, thus the low cost aircrafts fly more often. Meanwhile, the conventional airlines take 45 minutes to return because the return is delayed due to using high-traffic airports.

3 – Low cost flights are direct, without transfers, and short. The conventional flights have transfers and are long-haul.

4 – As the airports used by low cost companies use to be smaller, they have simpler facilities with lower costs, while the conventional airlines use larger airports with higher costs.

5 – Tickets are sold directly, primarily through the Internet as electronic tickets (easyJet 95%), while the conventional airlines sell part of their tickets through travel agents, increasing the cost.

6 – There are no extras and therefore costs are reduced. In the conventional airlines, there are entertainment magazines, quick check-in, lounge, paper tickets, business class, catering, etc.

7 – The fleet of low cost airlines is standardized (using a single model of aircraft), thus maintenance is cheaper and staff training is less costly.

8 – The salary has a high proportion of variability (up to 26%), thus the cost of personnel is more optimized. In the conventional airlines, the basic salary is higher; it only varies by 11%.

So if we take into account the savings due to the higher density of seats (16%), the increased use of aircrafts (3%), the reduced cost of personnel (3%), cheaper Airports and lower rates (6%), the use of a single aircraft model (2%), the lower cost of aircraft parking (10%), the suppression of in-flight catering (6%), the elimination of agency fees (6% ), low wages (3%) and lower administrative costs (2%), we get a 43% savings over conventional airlines … you know, do not be afraid to travel on low cost, but please note that it won´t be the same as a conventional one. It definitely makes you save some money if you are determined to cope with the inconvenience of extremely uncomfortable seats and no catering at all.