Fuengirola will host the XVI International Fair of Peoples at the fairgrounds in the city with free admission from 29th of April to 2nd of May, where will be represented more than 33 countries and communities, according to the Council of Tourism of this town, Jose Sanchez.
In 2009 visited more than 900,000 peoplethe fairgrounds of Fuengirola to enjoy this multicultural festival, which created direct employment for about 500 people and the occupancy of Hotels in Fuengirola during the celebration of this event was nearly 100 percent.

Also, Fuengirola has experienced a significant increase in population in recent years, becoming a place where people of different cultures live together from different parts of Spain and the rest of the world.

In an attempt to introduce the customs, folklore, gastronomy and cultural, historic and tourist attractions of every inhabitant of this multicultural city, in 1994 was launched this project which over the years has become one of the most important events, regionally, nationally and even internationally.

According to the mayor, “An event , that year after year, is held in the municipality and which after sixteen years has become a must for many citizens and visitors in this time of year. It is a fair in which people live of different nationalities in perfect harmony and the common denominator is fun.”

He also stated that during these four days, visitors have the opportunity to travel around the world and know the traditions and folklore of these places, while you can taste the typical dishes and drinks of each. Additionally, there will be as well exhibition and sale of typical products. 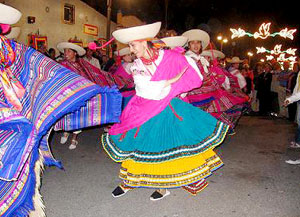 The International People’s Fair is jointly organized by the Department of Tourism of Fuengirola and the various associations, organizations, clubs and national and foreign groups located in the municipality.

Furthermore, on the same weekend and as well on the Fairgrounds, the Malaga Surfing Club organizes a Hawaiian party on April 30th, from 21:00 PM in Fuengirola.

The Fairground of Fuengirola is located at Avenida Jesus Santos Rein, in a central location with easy access.