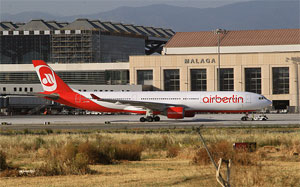 The German airline Air Berlin expands the number of frequencies from Malaga airport to seven European cities from the winter season onwards which runs from November 1st to April 30th next year.

On the other hand, there are new connections to Stockholm (Sweden) stopping at Tegel airport in Berlin (Germany) every Sunday, and also via Berlin-Tegel to Copenhagen (Denmark) twice weekly; to Helsinki (Finland) and Moscow (Russia) on Friday.

There is also a new connection to Innsbruck (Austria) via Vienna, which will operate three times weekly – Monday, Wednesday and Friday – as well as direct flights to Zurich (Switzerland) on Fridays and Sundays.

The airline has a fairly stable German home market and the forecast of the German economy is more than positive. This, added to that long-haul operations are affected by air rates will lead to benefit other destinations like the Costa del Sol.