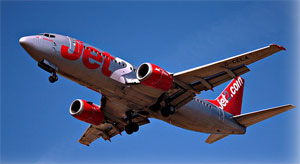 The new route to the Scottish city will be launched in April 2011 with two weekly frequencies.

The British low cost airline Jet2.com will open a new route from Malaga Airport to the Scottish city of Edinburgh. The company has announced that this flight will start operating from the 2nd of April 2011. The direct connection will have two frequencies a week.

The managing director of Jet2.com highlighted in a press release the importance of this new route. “With it we connect two wonderful cities and confirm our commitment to Malaga and Spain”, said the manager of the ‘low cost’.

The British airline thus released its fifth route from the Pablo Ruiz Picasso Airport in Malaga to the UK. The airline already offers direct flights from Malaga to the British cities of Leeds, Manchester, Newcastle and Blackpool.

The new connection will have a double advantage for Malaga, receiving tourists in Scotland and also for the locals of Malaga, who can travel on a direct route to the Scottish city.