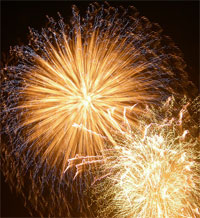 We from Airmalaga wish our readers and visitors to Malaga a Happy and prosperous New Year 2011!

For those of you who are currently in Malaga and want to join the lively joy that takes place in the streets, we have some information from the major New Year celebrations in Málaga´s popular squares and municipalities.

In Malaga city will take place the traditional New Year´s Eve party in the square of Plaza de la Constitucion, with a multimedia show, live concert and a total of 75.000 watts lightning, until 2 am in the morning. The city council will distribute furthermore 3000 bags of grapes and party favors among the participants.

The City Council of Torremolinos says goodbye to the old year as customary with a New Year’s Eve Fiesta with neighbors and visitors at the Municipal Auditorium “Principe de Asturias”. The party will start at 11 pm and will be animated by live music and bags of grapes which will be distributed free to celebrate the New Year.

Also Benalmadena and Arroyo de la Miel will do so. La Plaza de la Mezquita in Arroyo will host a big dancing party starting at 11:30 pm with live orchestras. Meanwhile, Benalmádena Pueblo has a big party at the Plaza del Aguacil from 11:30 pm onwards.

The neighboring municipality of Mijas has organized in the Plaza Virgen de la Peña a sensational welcome party for 2011. The Town Hall clock will give the twelve o´clock chimes and the party continues with music and fun until the wee hours of the morning.

For visitors who are not familiar with this Spanish custom: With each stroke you eat a grape, twelve in all, for good luck and prosperity for the coming year. Furthermore, the people of Malaga like dressing up a little, with multicolored wigs and masks and wearing red underwear, which is another custom to bring good luck in love.