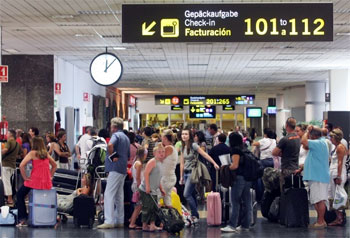 Malaga airport is planning to operate 3,465 flights between this Friday and Monday, April 25, a period in which is expected to pass through the Costa del Sol airport over half a million passengers, according to the seats offered by airlines.

As reported from Aena, the data show, once again, the recovery of air traffic, as the number of scheduled operations at Malaga Airport compared with last year has increased by 15.5%. Also the number of seats available shows a significant increase, 17.9% more than at Easter 2010.

Forecasts point to the Saturday April 16 as the day for most air traffic, with 351 operations and 57,345 scheduled seats.