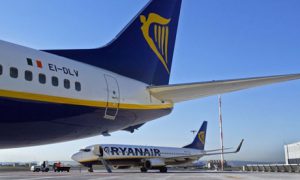 Ryanair has announced on Tuesday a new connection between Malaga on the Costa del Sol and Leipzig in eastern Germany. This route, which opens on March 26, 2012, will operate two flights a week – Monday and Friday – as has been reported by the low-cost airline.

To celebrate this new connection, the company has launched an offer until Thursday midnight with one way tickets on all routes at 9.99 Euros, taxes included. The trip can be made between December and January and from Monday to Thursday.